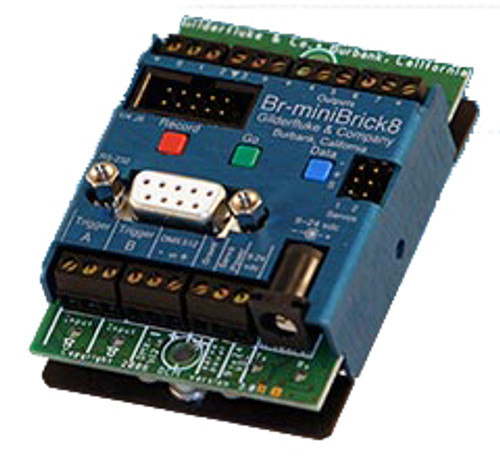 You can program the digital outputs without a computer. Press and hold the red ‘Record’ button until the first output flashes. Press again to step to the output you want to record. When you are ready to record, tap the green ‘Go’ button. Any previously recorded data will play back. While you press and hold the ‘Record’ button, anything you do on the blue ‘Data’ button is recorded on this one output while the other outputs continue to play back. The Br-MiniBrick8 will remember exactly what you do and precisely when you did it. You repeat this until you have all eight outputs programmed just the way you want them.

To program the Br-MiniBrick8 using a computer, you can draw the sequence you need on the screen of your computer using our included PC•MACs software. With the optional PC•MACs ‘RealTime’ license, you can program in RealTime using the PC’s mouse/keyboard. PC•MACs will remember exactly what you do and precisely when you did it. When you have all your shows completed, you can send them to the Br-MiniBrick8 through the serial port. The PC can then go away. The Br-MiniBrick8 will run by itself.

Features of the Br-MiniBrick8 include:

Automatic ‘program in place’ download through the standard serial port on your PC and the included PC•MACs software. It takes about twenty seconds to download a fifteen minute show.
Each Br-MiniBrick8 has a single channel show capacity of over thirty-six minutes at thirty updates per second! Once programmed, shows are saved for approximately forty years, with or without power applied.
Two optoisolated inputs are used to trigger from push buttons, motion sensors, or any other type of switch.
Supports up to 255 shows at a time (from serial). You can loop a single show or build ‘chains’ of shows
Each of the four outputs is rated for a continuous load of 150 ma., or 500 ma. peak at 24 vdc. This is enough to drive small solenoid valves, relays, lights, and similar loads. The LEDs show all output activity.
Runs on anything from nine to 24 vdc, including batteries. Mounts in 2.75” ‘Snap Track’ or on standoffs.